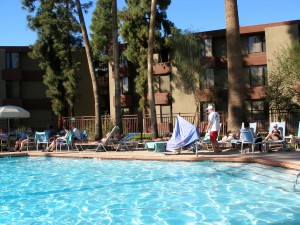 Today, at the conclusion of the 31st annual Phoenix tournament, director and Executive Committee member Larry Rand announced that the WGPO Word Cup for 2016 will be held in Tempe, Arizona, at the Doubletree by Hilton hotel that hosted the tournament that just concluded.  It’s a lovely facility.  Those of us who spent a long weekend here are pleased at the prospect of returning.  Unlike the upcoming 2015 Word Cup in Oregon, this will be a summertime event.  The dates are July 29 for the Early Bird, followed by July 30 – August 3 for the Main Event.