From the Elections Committee (Lynda and Winter):

We asked the candidates their thoughts on the following questions which we believe are of major interest to the members. Their responses are below. There are some interesting areas of agreement and some great ideas for moving forward.  Click on the links for their answers:

The terms of four board members; Steve Pellinen, Keith Hegel, Laurie Cohen, and Helen Flores, expire at the end of the year.  Steve and Laurie are running for re-election, Helen and Keith are not.  We have three additional candidates for a total of five (Carl Voss has withdrawn).  Members will receive voting instructions next month via email.  Here are the candidates.  Click on the names to read their candidate statements. 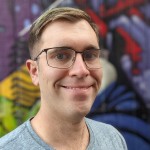 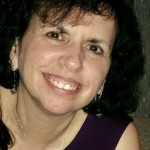 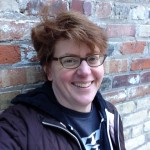 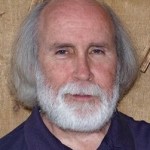 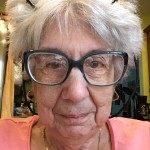 Work on the look-and-feel of the website is mostly completed. Need to make sure the website is as usable on mobile devices (phones, tablets) as on computers. Also determining locations for meeting minutes, committee reports, other content.

Statistical functionality is fully implemented. Includes full game-by-game, tournament-by-tournament stats for all players. Plan to work with Seth Lipkin to see if WGPO stats and upcoming tournaments can be shared with Cross-Tables.

Member login system is functional. All current WGPO members will have an account allowing them to login for tournament registration, update their information. New members will simply have to create an account. Tournament directors may register players, but the preferred method will be for players to do this themselves.

* Add functionality for managing a list of WGPO-affiliated clubs. Allow club directors to log in to the website and update data for club without a WGPO administrator. Ideally the result would be a more accurate club listing.

* Determine how to handle roll-out of the account system. Clear messaging needed to avoid current members creating a duplicate of themselves in the membership system.

Charles and Thomas aim to be ready to roll out the new website sometime soon after the beginning of the year, January/February 2023.
Board members noted that the Reinkes have done an excellent job. They anticipate that the redesign will serve WGPO and the Scrabble community well.

Board of Directors Nominees: Prior to the November meeting, the Elections Committee received statements of interest from the following players: Kathleen Murphy, Carl Voss, Susi Tiekert, Steve Pellinen, and Conrad Bassett-Bouchard. Keith Hagel nominated Laurie Cohen at the meeting, and she agreed to run for reelection. All nominees are members in good standing. Board members commented on the strong slate of candidates for the Board.

The Board decided to use the 2021 election and annual meeting announcement as a template for the upcoming meeting and election. There will be no referenda this year. WGPO’s annual Membership Meeting will begin on Saturday December 10 at 3:00 pm Eastern/ 2:00 pm Central/ 1:00 pm Mountain/Noon Pacific Time. Part I of the meeting will be an interactive Twitch video conference – approximately two hours – accessible to members. The agenda will include candidate announcements, committee reports, and a Question and Answer session. Part II will be an extended open voting period until the meeting closes on Wednesday December 14 shortly before midnight Central Time.

Here’s a belated report on the Madison one.  Lynda Finn and Mike Johnson really know how to organize and run fun-filled events.  Even those of us who lost most of our games had fun.  Noah Walton won the big money in TWL Division 1, while Thomas Reinke was Gibsonized in the final two rounds of the Collins division.  Lilla Sinanan won TWL Division 2 and Roxanne Prichard topped Division 3.  Details under “Past Tournaments”. 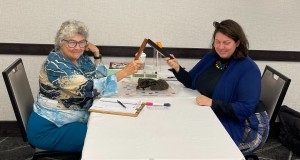 Since I’m not much of a photographer, I asked for others’ photos.  Ruchi Gupta responded with this picture of Roxanne Prichard with her mother, Trish Harrop.  On her way to victory, Roxanne beat Trish, 404 – 378.

One week after the conclusion of the Madison tournament, West Coast WGPO members had a choice between tourneys in Redwood City, California, and Lake Oswego, Oregon.  Since I live in Lake Oswego, my choice was easy.  Mitch Bayersdorfer made his WGPO directorial debut there.  He organized a Friendsgiving feast at Scott Smith’s house, raised $70 for literacy, and guided ten of us through a 6-game tournament.  Those of us who played poorly could attribute our losses to too much good food.  Washingtonians carried away the top prizes:  Adam Henderson in Division 1 and Mary Logullo in Division 2.  Maybe we need more border security.

I’ve gotten no report from Redwood City, but I see that Bennett Jacobstein emerged as the victor.

This has been an amazing year for WGPO!

The generous financial support from the Carter Chapman Shreve Family Foundation has enabled us to expand our footprint greatly in the Scrabble community, both in North America and overseas. We’ve sweetened prize funds for the Word Cup and other major events, stretched geographically, supported School Scrabble and worked to collaborate with CoCo and other organizations where we can find common ground.

Of course, we labored mightily to keep tournament players as safe as possible from Covid.  In addition, we handled, carefully and fairly, some touchy conduct issues.

It’s been an amazing year, but also an exhausting one for the WGPO Board of Directors. As we change and grow, our workload has at least doubled, maybe tripled.

So, we’re asking for committee help from you, the players who are the reason for our organization’s existence and success. We need folks, both old hands and newbies, to help us with diverse areas including, but not limited to finance, membership, rules, discipline, communications and technology. If you have experience or interest in one or more of these fields, or if you wish to suggest a different way you could help WGPO continue to flourish, let’s talk. Please contact Keith Hagel: wordguy1@gmail.com

Your WGPO Board of Directors:

Board Positions Open:  Four Board of Director positions are open for election/re-election to serve for a two-year term, 2023 – 2024. Current Board members do not all plan to seek re-election. NOTE: The membership will select positions on the Board. After that election, the new Board’s first duty will be electing new Officers.

Nominating Committee: Members listed below have agreed to serve on the Nominations Committee and provide additional assistance in the process.

Please contact the following or a Board member if questions: