The party room at the pizza place in Portland, Oregon, has a view, but inadequate heating.  Ten hardy players kept their fingers warm enough to place the tiles on the boards through six games.  Joanne Manson, seeded sixth, won Division A.  Scott Smith won Division B.  Details:  December results 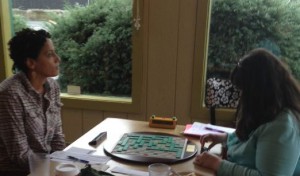 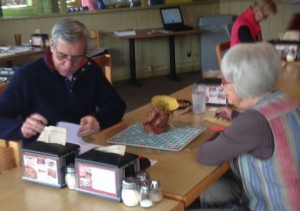 As reported by Steve Pellinen: 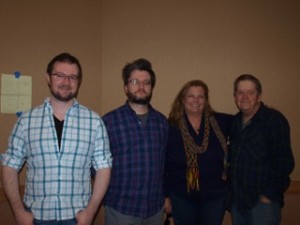 Carl was playing his first multiday tourney, and described it as “exhausting,” but I suspect we’ll be seeing more of him in the future.  Joe’s win was particularly impressive; after a 2 – 4 start, he went on to win his last seven games in a row, needing every one of those wins.  Julia Swaney came all the way from Colorado to finish with the best record of the weekend in any division.  Rob needed to win his last two games over Jim Kramer and Scott Jackson, no small task, but he did that to finish a game ahead of Zbigniew Wieckowski, who finished second and gained 169 rating points by way of the bottom starting seed. 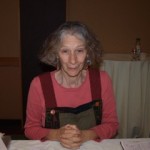 A big thank you to Diane Weinerman, who, with help from Nadine Jacobson, organized her first tournament (and was the victim of a surprise birthday celebration on Saturday).  All-in-all, another fun weekend of word play and camaraderie in Minnesota. 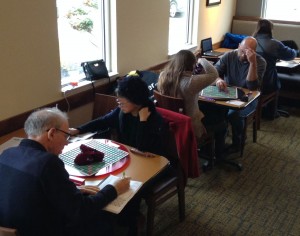 It’s a sunny morning and the players are ready to go.  Joel Wapnick and Maliha Mahmood are preparing to start their game.  Lisa Brown and Josh Kopczak have begun theirs.  Dorcas Alexander is waiting while Winter takes this picture.

I confess that I forgot to take my camera to Salem, Oregon, on the 22nd (I don’t have a smart phone).  There were 15 of us, divided into two groups and playing 6 games.  Leesa Bergeron hosted, Rich Moyer directed.  Dave Johnson won Division A.  Laurie Coatney won Division B.  Details at Salem Ratings. 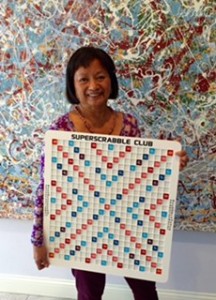 The Super Scrabble® players in California have declared themselves ready for serious competition.  They’ve organized a rated tournament to be held January 16 and 17, 2016, in Laguna Woods.  See the flyer for details.

For those not in the know:  The game is played with 200 tiles on a 21 by 21 grid.  There are premium squares aplenty, and 800+ scores in a two-person game are not uncommon.  For more information, visit the club web site, https://superscrabble.wordpress.com/.

Our club directory shows a number of playing locations in North America.  If you’re looking for a game, check it out.  If there’s nothing near you, why not start a group?

Please let me know if you want directory additions, changes, or deletions.