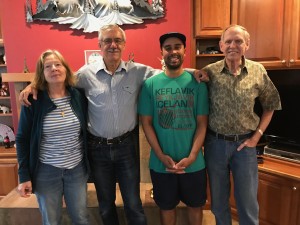 Fresh from his first-place finish at the 100 games tournament in Santa Fe, Gunther Jacobi beat out Dave Johnson for the win in Happy Valley, Oregon.

Dave and Howard hosted, providing plenty of delicious sustenance to see us through the six-game tourney. 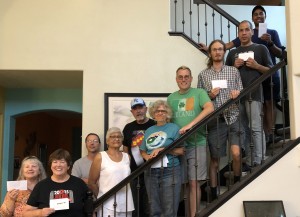 See WGPO on Facebook for more pictures and commentary.

Players have started gathering in Sante Fe for the Hundred Games! You can follow along at

To get all 100 games in, some games might be played out of order. You can find round-by-round standings posted after each round is complete, or you can find the live current standings (including all completed games) for each player on the scoreboard.

Games start tomorrow after lunch. Here’s hoping we all survive!

with apologies to Leonard Cohen

To challenge all us Scrabble® nerds

But you don’t really care what they mean, do ya?

So now we play without a qualm

Study these. There’s more than just a few – yeah!

We play for fun, and we play fair.

Don’t throw the tiles, try not to swear.

And never let a phony new one fool ya.

But, Baby, I’ve been here before.

I’ve got some points, still need some more.

You know I played this game before I knew ya.

Sometimes you win through luck and art.

But lose with grace – now that takes heart.

It’s still a cause to sing out Hallelujah.

Hallelujah, What’s it to ya?

When we first played we didn’t know

Did ya know that this verse rhymes with Julia?

I’ll start your clock if you are late

And I won’t ever hesitate

To play a phony bingo word right through ya.

But them’s the breaks, it isn’t news

You played it well, I’ll have to say that to ya.

Hallelujah, Say that to ya.

At times these words are not enough,

Most any word you play –well, that’ll do- yeah

Most Collins two’s, they really are peculiar.

If there are tile gods above

Don’t count upon their constant love.

Oh, looky there, the other guy outdrew ya.

Don’t whine about your Scrabble® plight

You still could win, keep up the fight.

Uh oh! I see they chose this time to screw ya.

Hallelujah, Time to screw ya.

And now we’ll sing another verse.

We’re almost done, it could be worse

It’s past time for this song to just be through, yeah

But we must have a final say

Then you all can go back and play

The word game we all love, you know it’s true, yeah

Hallelujah, What’s it to ya?

Hallelujah, Time to screw ya

In addition to officers listed above, approximately 40 players attended.  In response to Laurie’s question, 10 – 12 indicated that they were attending a WGPO tournament for the first time. The purposes of the meeting were: to introduce the organization and describe what WGPO members have been doing; outline upcoming work and projects; and ask for input and suggestions from those attending.

Extensive discussion followed at the member meeting. Many attending had assumed that all who registered to play automatically became members. Current members asked that when required membership is implemented, existing memberships be recognized and that the process be streamlined. There was strong support to requiring membership for participation in all tournaments, and no objections were voiced.

Following discussion, BPR members unanimously agreed that all WGPO players need to become WGPO members. They further agreed that the requirement should apply to all WGPO-sponsored tournaments in addition to Word Cups.

The group set the agenda for the Evening Player meeting and determined that Laurie Cohen would again chair the meeting. Topics shall include

Ongoing and Future Projects and

Questions and answers from those attending the meeting.

The Board meeting adjourned at 2:10 p.m.