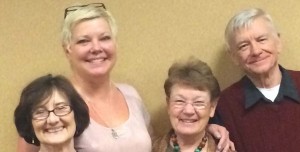 Meeting of the WGPO Executive Committee, Board of Player Representatives and Guests

Meeting called to order by Stephanie Steele at 1:05 pm

2. WEBSITE: Steve and Ruth provided an update on the status of the WGPO website. The switch was successfully made to a new server which now provides 24/7 service. Ruth will act as the funnel for postings on website (tasks to be transitioned from Henry Yeung and Rick Wong). Aaron Daly is working on a website design update. Steve Pellinen will join the tech committee.

3. RATINGS: Dominick finished the ratings using existing code, and arrived at a working process for rating tournaments. Dominick is working toward switching the ratings to Java. Wish list: Listing states next to names, projected number of wins, ideas for changing tournament results for consistent reporting. Dominick would be willing to maintain all of the data associated with WGPO membership and ratings; will follow up with Henry Yeung about web permissions.

4. WORD CUP 2014 STATUS REPORT: the 2014 Word Cup will be held in Madison, Wisconsin, August 1-6 (4 divisions, open format) directed by Lynda Finn and Bennett Jacobstein. So far there are 78 entrants, several already paid. An early bird will be directed by Larry if there is enough interest. Lynda and Bennett are working on detailed planning, and will make decisions regarding cut offs for divisions, distribution of prize money, integration of Collins; will welcome input from EC and BPR

5. ELECTION PROCESS (Ruth & Joe): Discussed ways to increase participation in voting. Joe offered possible options: Do a multiple choice survey asking why people did / did not vote; consider taking votes by email (Ruth reviewed the by laws which do not prohibit this). Dominick commented that we could set up an email group address for the survey if we decide to do one. The EC and BPR will recruit future nomination and elections committee volunteers.

6. ADD MEMBERS FOR LISTSERV: For this Phoenix tournament, Larry added instructions for joining the listserv. Dominick will review the membership document started by Melissa (dated June 2013) to see if it would be useful for tracking listserv participation.

a. EC and BPR members agreed we should have a codification of all WGPO policies that have been decided to date. Steph volunteered to compile existing policies, using past minutes as a starting point.

b. Agreement by all that there is a need for instituting a process for revisiting policies.

8. TWL3/OSPD5. General discussion of the availability of the anticipated new dictionary to WGPO members.

9. NUMBER OF TOURNAMENTS: Bennett spoke about MSI (Mind Sports International), which is sponsoring festivals of mind games like chess, with tournaments in LA, Berkeley and Las Vegas planned, and the potential impact on WGPO tournaments.

In December, members elected Larry Rand  to the Executive Committee and re-elected Stephanie Steele.  Steve Pellinen and Susi Tiekert were re-elected to the Board of Player Representatives and were joined by Ruth Hamilton and Rick Wong.  These terms began in January.  Keith Hagel continues to serve on the Executive Committee and Bennett Jacobstein is a continuing member of the Board of Player Representatives.

Voting is now open for the Word Game Players’ Organization election of members to its Executive Committee (EC) and Board of Player Representatives (BPR). Members will elect two candidate to serve on the EC, and four to serve on the BPR.

Voting is limited to WGPO members; anyone who joined on or before November 30, 2013 is eligible to participate. To vote:

3.  Select the WGPO December 2013 Election topic.  Candidates’ campaign statements, if provided, can be found there, as well as the ballots.  There are two candidates for the two open seats on the Executive Committee: Stephanie Steele and Larry Rand. There are five candidates for four open seats on the Board of Player Representative: Rick Wong, Steve Pellinen, Susi Tiekert, Mike Johnson, and Ruth Hamilton.

Members will be able to vote for two candidates for the EC and up to four for the BPR. No member may vote more than once for any individual candidate, and no votes may be changed once they are submitted

While this election primarily will be conducted online, the WGPO will try to assist members who wish to vote by mail. Mail-in ballots (with your name, contact information and the names of the candidates for whom you are voting) may be sent to Sue Hoehn, 2184 Scheffer Ave, St Paul MN 55116.  They must be received by December 14, 2013.

Meeting of the WGPO Executive Committee, Board of Representatives and Guests

Meeting called to order by Larry Rand at 1:05 pm

The meeting will be continued on August 6 at 1PM, with remaining agenda items and discussion of any issues brought up at the general membership meeting.

Open up for questions about the organization

Meeting adjourned at 10AM