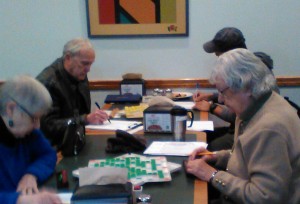 Fourteen players took part in a five-game tournament at our favorite West Linn pizza place.  On a normal Friday afternoon, our gathering here consists of two to eight players.  We were delighted to have a number of friends join us for the tournament, including three who drove down from Washington.

Gunther Jacobi won in the first division, P. K. Gott dominated the second group.  Our official photographer left before the winners were announced (seems to be a pattern – it happened at last week’s Long Beach tournament, too).  Here’s what I captured earlier with my cheapo cell phone.  In the background, you can see Gunther Jacobi’s cap as he’s facing second-place finisher Rich Moyer.  Charley Kaplan and Betty Cornelison are playing in the foreground.