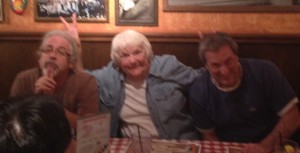 Gretchen Cowan celebrating at the Pruneyard in 2014

The 29th Annual Silicon Valley Classic will be held at the Pruneyard Plaza in Campbell CA from August 13 – 15.  The tournament has been given a waiver and will be allowed a maximum of 60 players.  It has previously always been held on Memorial Day Weekend.  It was not held in 2020 and the 2021 version has been moved to the summer (COVID-19).

It was started by Johnny Nevarez and has been directed over the years by Rick Wong, Jeff Widergren, John Karris, John Green, Steve Pellinen and Bennett Jacobstein.

Notable tournament-related highlights have included a very young Noah Walton singing opera at a group dinner at Buca di Beppo, Stu Goldman’s great upset at whoever used his jacket to cover up an air-conditioning vent (many years later it was revealed the culprit was Alan Whitman), and Chris Cree chasing John Green down the hall to discuss how the pairings were done.

Past tournament winners have included many prominent Scrabble players: