o   Board Secretary send message to qualified voting members seeking resumes for open Board positions. Bylaws require 30 days prior to November Board meeting.

o   Approve expenditure for electionrunner. The Committee reported sending 861 ballots in 2021 at a cost of $90. 373 voted. The Board approved expenditure of $90 and look forward to increased membership voting.

The Board agreed on the above Elections Committee Report actions. The following requirements were identified for the Board to address in November.

o   November: Deadline for list of members in good standing (registered before cut-off date and eligible to vote) with their email addresses

o   November: Consider changing “majority” to “plurality” in bylaws, as well as other desired bylaws changes.

4.  Other Scrabble Organization Coordination:  WGPO is coordinating again with CoCo by providing a share of prize funds to co-sponsor the New Orleans Crescent City Tournament January 14 -16, 2023.

NASPA has changed its policy and will now permit NASPA directors to direct WGPO tournaments without penalizing them. Board members reviewed Judy Cole’s announcement regarding the decision. The Board identified areas of concern and agreed to draft a response to Judy. Steve noted the need for a congenial, cooperative relationship with NASPA leadership and members. Coordinated efforts are needed to grow the game.

Adjournment: The Board adjourned the meeting at 7:50 p.m., CST (Bennett/Will).

These requirements amend and supersede Updated Tournament Rules issued by the Board of Player Representatives (BPR), effective  September 1 – December 31, 2021. Rules apply to sanctioned in person tournament play only. Standards for resuming local WGPO Club play shall be determined by individual clubs and directors.Variants of the COVID virus, Delta and Omicron, have evolved. Because viruses constantly change through mutation, new variants are also expected to occur.  WGPO requirements are based on Center for Disease Control (CDC) COVID-19 Interim Public Health Recommendations for Fully Vaccinated People, updated November 19, 2021, and advice from Public Health Agency of Canada (PHAC).

For tournaments prior to November 1, 2022, players will follow previous Covid vaccine policy (primary series plus 1 or 2 boosters depending on age.)

Either a printed or electronic copy of COVID 19 vaccine plus booster must be presented to tournament director at time of registration.

6.  Directors shall provide hand sanitizer and cleaning wipes to participants

Bennett Jacobstein gathered 15 of us at a pizza place in Vancouver, Washington, on Sunday, September 25.  We enjoyed good pizza and great company.  Three of us showed up in Calgary, Alberta, five days later to begin three days of Scrabble® with 14 of our Canadian friends and Californian David Pearl.  Adam Henderson managed to take second place in Division 1 at both tournaments.  Mary Logullo was third in Calgary’s Division 2, while I got the prize for fourth place in Division 1 in Vancouver.

It was beautiful autumn weather in Calgary.  The trees were turning to gold, with sunshine and highs in the 70’s. 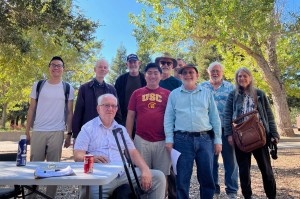 Ten players enjoyed Scrabble in the Park on an ideal day in Moraga with perfect weather.  Billy Nakamura and Saint battled for first place with Billy winning on spread.  Alan Whitman won the performance prize finishing 4th place while being seeded eighth.

Have you looked at the list of upcoming tournaments lately?   It’s growing, with more to be added soon.

After two years off, Calgary is again hosting its three-day autumn event from September 30 through October 2.  This has always been fun.  The Calgarians are great hosts and pleasant people.  Here are the details:  Calgary flyer.

Las Vegas is always a popular spot for a tournament.  There’s one scheduled for October 15 and 16.  Details:  Las Vegas Flyer.

And over Veterans’ Day weekend, there’s the first of three WGPO Regional tournaments, with an augmented prize pool.  This will be in Madison, Wisconsin.  Madison Flyer.

These are the big ones coming soon.  There are others.  Check them out under Upcoming Tournaments

Approve July 3, 2022 Minutes: With no changes or additions, the Minutes were approved (Steve/Laurie).

Member Discipline/Discipline Committee Needed: On August 4, the Board took disciplinary against a member for failing to disclose testing positive for COVID in order to play in a tournament. The player received an immediate suspension from tournament play and attendance. The player is further required to acknowledge and apologize for violating tournament requirements.

Board Members discussed sharing player disciplinary action with directors, the full membership, and the public. They agreed that tournament directors need to know which members are suspended and which are in good standing. However, the identity of a disciplined member need not be shared with the general public or the membership at large. Therefore, Board meeting minutes shall briefly summarize the infraction, disciplinary action taken, but without member identification.

For future discussion, Board members asked how discipline should be addressed when there is no consensus: How many votes will be required to act: a simple majority? Unanimity? or other?

Keith noted that disciplinary issues consume an inordinate amount of time for the Board, He recommended that the President appoint a Disciplinary Committee to be charged with reviewing complaints, requesting and assessing incident reports from all parties involved, and recommending Board action.

2022 Word Cup Review – What worked, what could be improved?  Improvements suggested included:

As noted earlier, the TWL tournament should have been announced frequently during the streaming session. What other measures might have been taken to include more TWL coverage?

Our next CoCo collaboration will be at the upcoming 2023 Crescent City Cup. Tournament organizers approached CoCo, who then contacted WGPO, about co-sponsoring the event in New Orleans. Steve will meet with CoCo leaders to discuss this tournament and ways to improve further joint ventures.

2023 Word Cup 11 Discussion: Board members discussed alternative locations and venues in Northeast United States for Word Cup 11, including costs and benefits of two alternatives. Details about specific venues were discussed in closed Executive Session. Members expressed concerns and raised questions that need to be addressed before the Board will make a final decision. Steve agreed to gather additional information within the next two weeks.

Election Committee: Bennett agreed to contact Lynda Finn to request that she chair the Elections Committee again. Four members’ terms are up at the end of the year: Laurie Cohen, Helen Flores, Keith Hagel and Steve Pellinen. Helen suggested that Board members identify potential candidates for office.

Adjournment: The Board adjourned the Board meeting at 8:00 pm CST (Helen/Keith).

The terms of four board members; Steve Pellinen, Keith Hegel, Laurie Cohen, and Helen Flores, expire at the end of the year.  Steve and Laurie are running for re-election, Helen and Keith are not.  We have four additional candidates for…